Hold up. I set out to write this blog to avoid just spinning out the same clichés of music writing worldwide. ‘Dark, broody, full of soul and body’ could describe anything from Oscar nominations, to craft beer, to a fucking Audi commercial. So let’s steer clear of that pish.

I’ve committed the blogger’s cardinal sin; not posting for a while. So many great blogs lie in stasis, or worse, in the hellish limbo of having no recognised domain. Derelict and directionless, these former fountains of opinion, ill-informed or otherwise, now lie at the mercy of the cruel Internet, an online society that devours content at an alarming rate.

Well, that’s a cheery picture of the future, but here at Scotland’s #586 most popular music blog I say:

My personal musical output may well be in stasis due to a combination of depression and apathy; indeed for all my criticism of the rigidity of folk music, I cannot find a form of playing or recording that motivates me at all, hence the sweet hee-haw in terms of new tunes etc. All I can say is that I have been writing, and in the unlikely event of people being packed into a beer-soaked basement, with the express intention of listening to someone one with a guitar bemoan the state of neo-liberal politics in the UK, then I will be ready. Until then, I will probably be pretty quiet and sullen. What a dobber.

Neither quiet nor sullen are Felix and the Sunsets who have released their 4th single of the year; Pass Me My Matches.

I am never sure about capitalisation for minor words like ‘my’, ‘of’ or ‘the’. Prepositions, articles and pronouns probably don’t really figure into the creative process of most rock musicians. However, I moonlight as an English teacher, so it flashes up in my subconscious. My musical distributor relegates the bricks and mortar of the English language to lower case, as if they had some lesser importance, and that albums and songs could easily do without them. Well, I have to disagree, and to prove my point I have made a wee quiz for you. here are some classic album titles with pronouns, prepositions and articles removed. See if you can guess what they are:

*This was taken from the list of the greatest selling albums of all time. From this list I also learned that Hybrid Theory by Linkin Park is one of the best selling pieces of music ever, with over 27 million copies sold! Who would have thought that eh?

Musical diversity is always something that motivates me as a listener, and I suppose this is why I love artists such as Michael Marra or Sparks so much, while finding Hair Metal absolutely unlistenable. The last of FatS’ (Felix and the Sunsets. Are we in acronym land yet? Yes? No?) is pure blues. Scorching guitar, reminds me of the solo in Five-to-One by The Doors. It’s what a guitar solo maybe should be, if we are talking in purists’ terms, the kind of musical explosion that many axemen would be proud of. It’s dark, it’s broody, it’s full of soul and body…

Hold up. I set out to write this blog to avoid just spinning out the same clichés of music writing worldwide. ‘Dark, broody, full of soul and body’ could describe anything from Oscar nominations, to craft beer, to a fucking Audi commercial. So let’s steer clear of that pish.

What can I say then of FatS? (yeah we are running with it. Long live acronyms) The debut EP of the Leith-based rocker, rollers, soulers and mushroom swallowers is an honest, diverse, socially aware beginning for a band that’ll go on in leaps and bounds in this author’s opinion. The feint possibility of live music’s return can only be a winner for these lads as I can visualise these tunes sounding ace on stage. See you all then. Adios!

Not a Music Blog – Review and Reaction 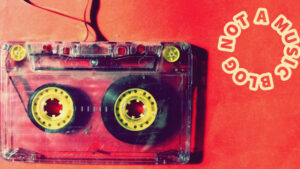